Whether it is an epidemic or a natural disaster, actor Pal Shah always comes forward for help. The same hero Pal Shah has been awarded the Real Hero of the Year. He is a hero in the film and he is respected as a real hero because of his supportive behavior in the society. As soon as the epidemic started, he immediately announced to provide assistance of Rs. 500,000 to the distressed film technicians.

Then other artists like him also extended a helping hand. He is still cooperating. They have reached various places of the country with relief and assistance.

The ‘Silver Kosheli Campaign’, which started to provide relief to the filmmakers who became unemployed due to the lockdown, has honored Paul Prakash Subedi of Rajatpat Kosheli informed that Pal Shah, who was involved in rescue and assistance, was honored for the same social work.

Paul was absent to receive the award at a support program in Kathmandu on Monday. He could not accept the honor given to him as he was out of Kathmandu for relief.

Model Nisha Ghimire, who fell ill at the same event, has also been provided assistance of Rs 1.17 million. Megha Chaudhary, who provided free treatment to Nisha, has also been honored. Megha certificate was received by Durganath Dahal of Navjivan Philanthropy Society of Nepal. 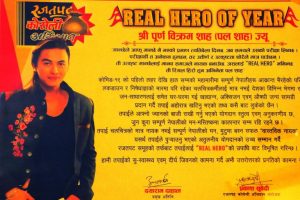 The story of the resort, builtafter seen from helicopter, can be seen from where all the mountains are eight meters high.