A variant of the virus Delta variant that has spread in Nepal has been confirmed. The Ministry of Health and Population has called for greater vigilance as the new strain of the virus is now more contagious and affects people of all age groups.

In a statement issued today, the ministry’s Joint Spokesperson Sameer Kumar Adhikari said that in nine of the 47 samples confirmed as delta variants, there were additional mutations in the AY.

It is said that a mutation called K1417N was found. So far, the species has been confirmed in more than 10 countries around the world, including Nepal, the ministry said. See release 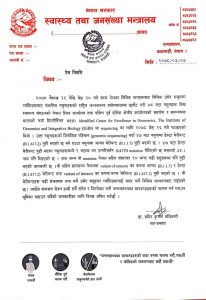 It is said to be more contagious than the Delta variant. In a sample test conducted by the Ministry of Health and Population in collaboration with the World Health Organization, many people were found to be infected with the Delta variant.

According to Dr Krishna Poudel, spokesperson of the Ministry of Health and Population, out of 48 samples collected from different parts of the country, 47 were infected with Delta variant and one with Alpha variant.

Dr. Bascotta, who has a PhD in law, is surprised that no charges should be filed against the actor in two courts.

After the wedding, Harihar’s house is even brighter on Tihar