It is written on the Facebook page of Hon’ble Deepak Manange and Rohit Gurung about the meeting with Prachanda: Patience is the key to success. ”

Due to Manange, Krishna Chandra Pokhrel had succeeded in removing the outgoing Chief Minister of Gandaki Prithvi Subba Gurung and appointing him as the Chief Minister. 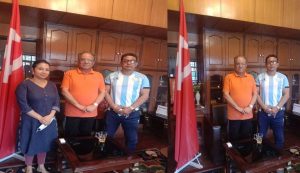 As soon as he was appointed as the Chief Minister of Nepal, he appointed four people including Manange as non-departmental ministers. However, no ministry has been given to them so far.

According to sources, the most powerful of the 11 ministries is the Ministry of Finance, while the Congress, Maoists and Manange are also in the fray for the Ministry of Internal Affairs and Physical Infrastructure.

The world’s largest hotel has been closed for 80 years

Bimal Gharti Magar joined Machhindra. Where did Bimal lose so many years?