Prime minister  KP Sharma Oli has made the changes the ministry of the current 5 minister after the 20 ministers was out of cabinet by decision made by supreme court.responsibilities of the ministers. 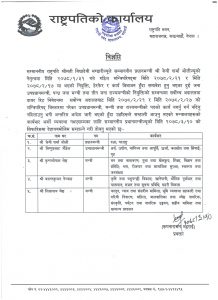 Deputy Prime Minister Bishnu Poudel will be the minster for  Finance, Industry, Commerce and Supply, Energy, Water Resources and Irrigation and Home Ministry.

Minister Krishna Gopal Shrestha has been given the responsibility of the Ministry of Forest and Environment, , Labor, Employment and Health,Youth and Sports, Education.

According to the notice issued by office of President, the above mentioned minister has been appointed with referral from prime minister Kp Sharma oli.

Witch doctor assistant revealed the truth, the girl was beaten up for 3 days before death

Rajesh Hamal, who is passionate about his mother on his birthday