Actress Sandhya KC is married. She was legally married to her boyfriend Abhushan Jyoti Kansakar on Friday. Sharing some romantic pictures with her husband on social media, she informed that she is married.

She said she would marry religiously once the situation returned to normal. She had been having an affair with Abhushan for about two years.

“We have joined hands to start a beautiful journey as a married couple,” Sandhya wrote on Facebook. I am thrilled to announce the news of my marriage to Abhushan. Religiously we have yet to become one, which we will do once the situation is comfortable.

Until then, we want your love and blessings. From today, we will not walk alone. Our heart will be our refuge. ‘

Sandhya’s debut film ‘Dreams’ is where she started her career as a wet. She was in it as a supporting actress. She has also acted in films like ‘Kamle Ko Bihe, Pandit Baje Ko Lauri, Katha Kathmandu’. 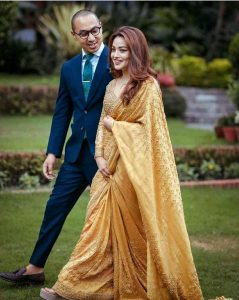 “Kamleko Bihe” has not been performed even after years of construction. She has also acted in some music videos.

Jayante of Sakkigoni is ashamed to remember marrying Luri, Luri is not jealous, Pandey and Jigri are my god